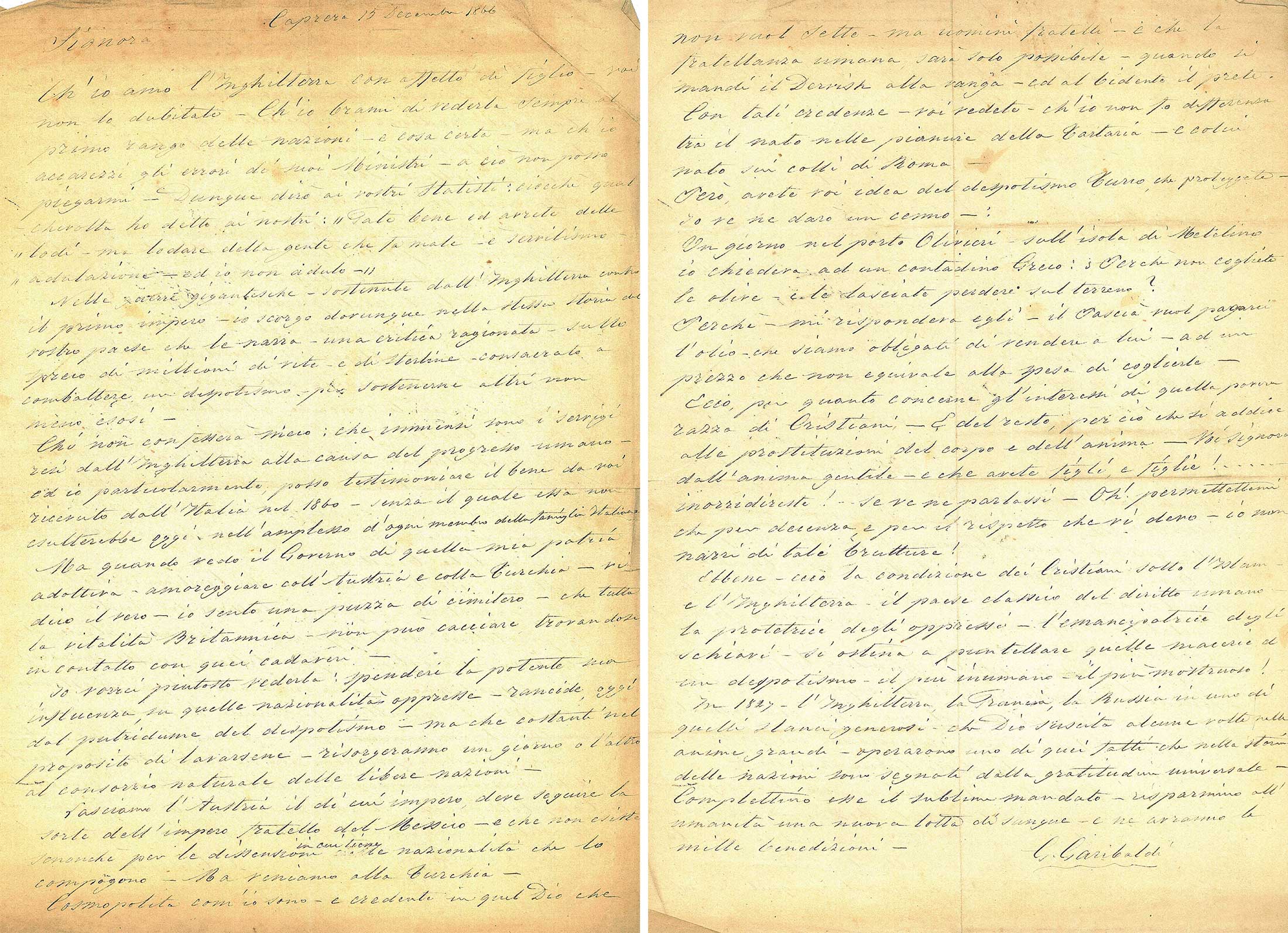 Garibaldi wrote this letter a few years after the one he sent to Negretti (case 21), however the content of this letter is far more significant. The content shows that Garibaldi, even though he was retired on the island of Caprera, remained very active politically. Here, he expresses very openly and vividly his opinion about a specific yet complex issue: the "Eastern Question". This was mainly concerned with the political balance of European territories after the fall of the Ottoman Empire - primarily the eastern territories of the Balkans. In his letter Garibaldi criticized the role of England in the aftermath of the Crimean War. Because of its complex political significance, this letter truly represents one of the most important pieces in Reed's collection.

That I love England with the affection of a son you cannot doubt, and that it is ever the desire of my heart to see her in the first rank among Nations, is equally certain, but to caress the errors of her Ministers - To that I cannot lend myself, I repeat therefore to your Statesmen that which I have stated to our own, "Do well, and you will receive praise, but to lavish praise on those who do evil, is servile adulation, and I never flatter". In the war of giants waged by England against the first Emperor, I search in the pages of those histories of your Country which narrate it, for one single expression of condemnation, at the expenditure of Millions of lives, and Millions of money, sacrificed to combat one despotism, indeed but certainly to sustain another not less exacting. Who, however on the other will not confess with me, that the services rendered by England to the cause of human progress have been immense? And I'm particular bear testimony to the benefits received from you by Italy in 1860, without which we should not now be exulting in the embrace of every Member of the Italian family. But when I see the Government of this my adopted Country allied with Austria, and with Turkey, I must tell you the truth, namely that I inhale the fumes of a charnel house which all the National vitality may be unable to dispel, if Great Britain places herself in contact with these dead corpses. I would rather see her using her power and her influence to support those oppressed Nationalities at present going to decay in the putrid atmosphere of despotism but who remaining constant to their desire of purifying themselves must certainly rise one day or another to their natural places in the fraternity of free Nations.

Let us leave Austria whose Emperor ought to receive the fate of his brother Emperor of Mexico and which exists only through the dissentions of the Nationalities checkmating each others efforts towards emancipation.

Let us travel to Turkey Cosmopolitan as I am and a believer in that God who desires not factions and discords but on the contrary that men should love each other as Brethren (which fraternization can only be possible however when we send the Dervish to the spade and the Romish Priest to the matlock) believing fully all this I can make no difference between the Natives of the plains of Tartary and my countrymen born on the sunny Hills of Rome. But have you any idea what this despotism of the Turks protested by you really is? I will give you an example.

One day, in the Port of Olivieri, in the Island of Mytelene, I enquired of a Greek peasant the reason why he did not gather up the olives, instead of permitting them to perish on the ground. "Because", he answered, "the Pacha buys up all the olives, and we are compelled to deliver them to him, at such a low price that it would not pay the expense of gathering them in". Behold! How the interest of this poor remnant of Christians is neglected in temporal matters. And for the rest, for all that concerns the prostitution of the body and of the soul, how am I to relate it to you? Who have so kind a heart, and who have a son and daughters! It is most horrible! And if I do not speak of it, oh! Forgive me! It is for the sake of decency, and from the respect which I owe you, that I cannot detail you such brutalities.

Well, now I have laid before you the condition of the Christians under Islam and Britain the classic ground of human rights, the protectress of the oppressed, the emancipator of the slaves, persists in upholding these fruits of a despotism the most inhuman, and the most monstrous! In 1827, England, France, and Russia, in one of those outbursts of generosity which God sometimes excites in great minds, accomplished one of those facts which in the history of nations are followed by Universal gratitude. Let them complete the sublime task, let them spare to humanity a fresh torrent of blood, and they will receive from her a thousand benedictions.
G. Garibaldi