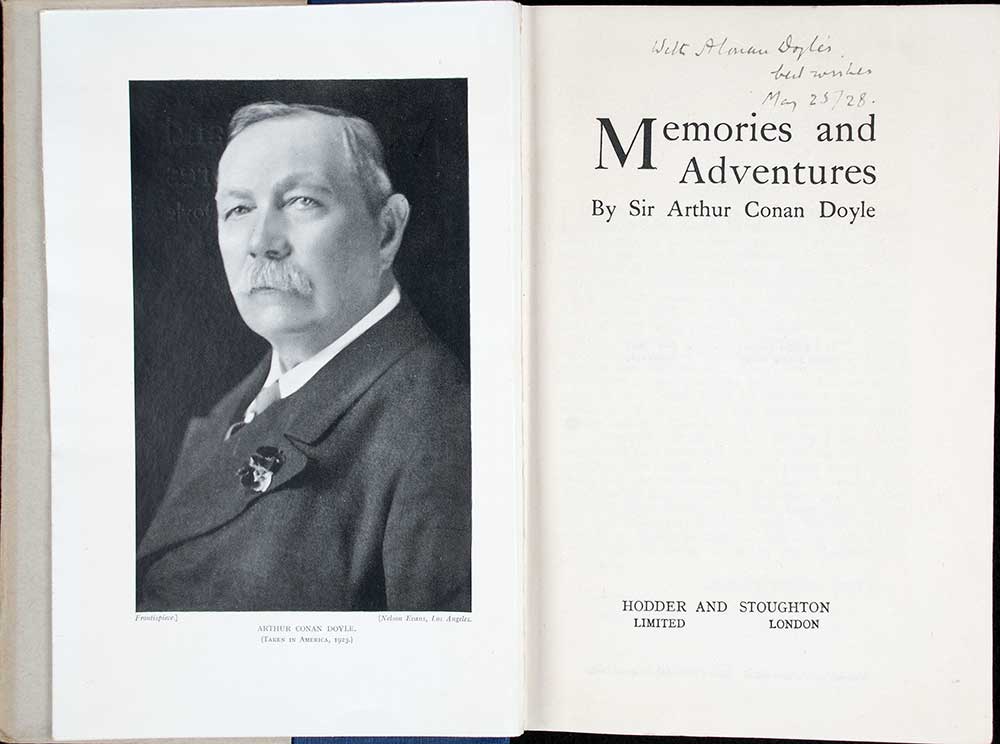 This copy of Conan Doyle’s Memories and adventures with his signed inscription was sent to A.H. Reed, as he recalls in his 1969 autobiography:

“About 40 years ago I found, in a miscellaneous parcel of letters, a very personal one written by the novelist as a young man to his mother … With a desire to do as I would have liked to be done by, I wrote to Sir Arthur telling him I would send him the letter if desired. I received a reply from his secretary (perhaps he suspected I merely wanted his own autograph) stating that he would be glad to receive it, and that in acknowledgement he would send me several letters of eminent people. I replied, sending his mother’s letter, and stating that all I wanted was a replacement letter of his own. He did not reply, nor send me the letters he had promised; perhaps he thought the inscribed Memories and adventures would please me more.” 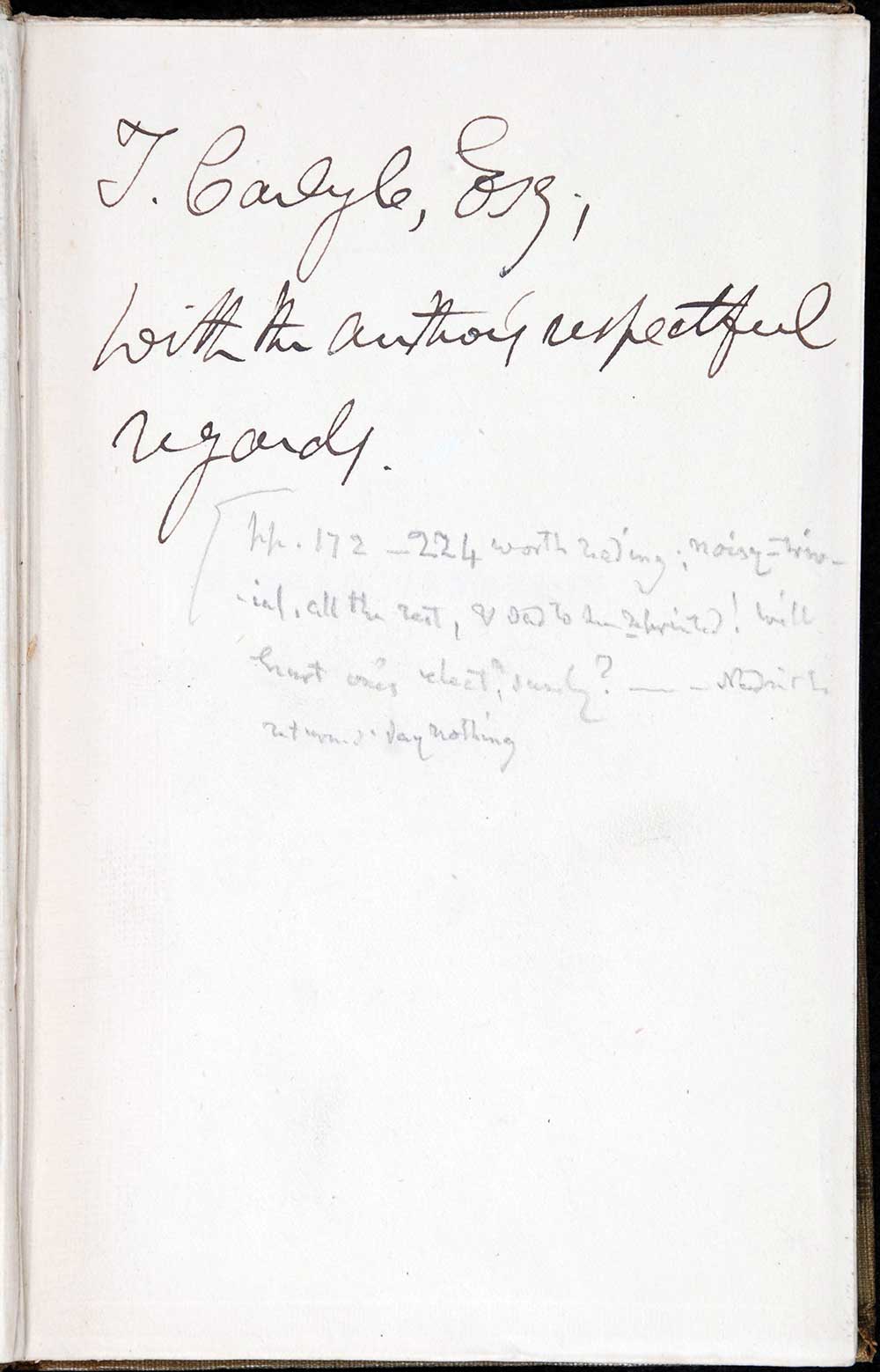 This presentation copy was sent by the author, the Scottish philosopher James Hutchison Stirling (1820-1909) to the eminent biographer and historian Thomas Carlyle (1795-1881).

The Oxford dictionary of national biography describes Stirling as ‘an ardent admirer of Carlyle … [who] corresponded with the sage as early as 1842, mimicked his passionate style, adopted his cultural pretensions, and took his advice to learn French and German as a means to mastery over contemporary European literature and philosophy.’

Beneath the inscription are pencilled notes in Carlyle’s hand. Though he found pages 172-224 ‘worth reading’ it appears Carlyle found much of the rest of Stirling’s text to be ‘noisy - trivial.’ 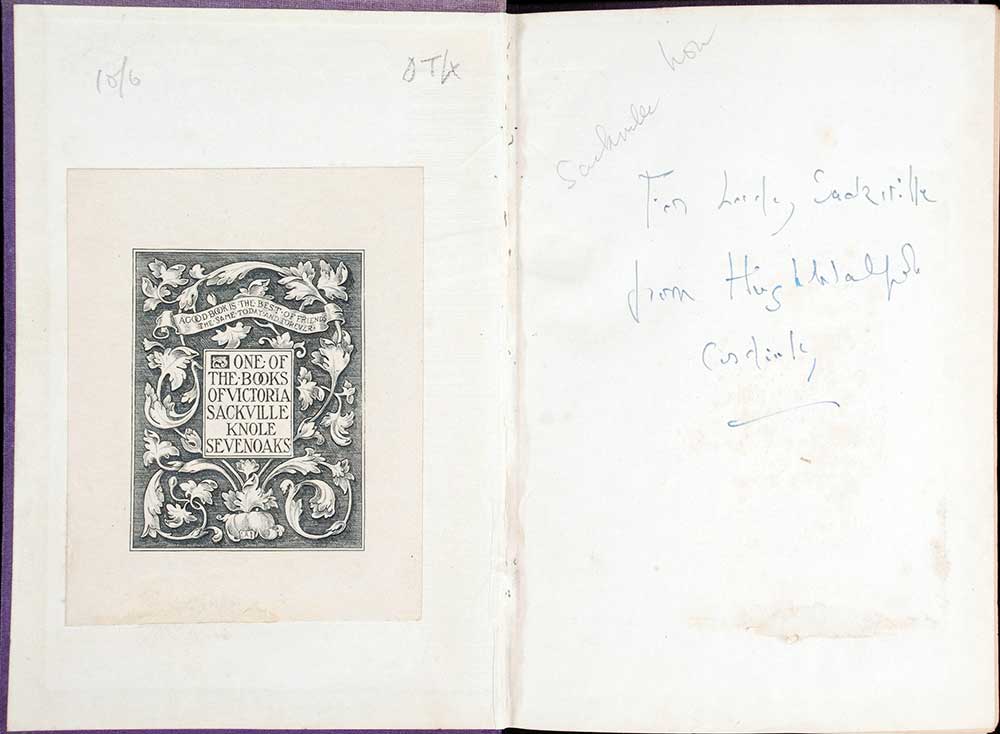 Hugh Walpole. Fortitude: being a true and faithful account of the education of an explorer. London: M. Secker, 1916.

The Reed copy of the early Hugh Walpole novel Fortitude contains the author’s presentation inscription “to Lady Sackville” on the flyleaf, with the bookplate of Victoria Sackville of Knole House affixed to the front pastedown.

Victoria, usually known as Vita Sackville-West (1892-1962), was a colourful figure with whom Walpole was well acquainted. Vita was a successful novelist, poet and journalist, as well as an eminent garden-designer. She is also remembered as the inspiration for the androgynous protagonist of Virginia Woolf’s 1928 novel Orlando.

Hugh Walpole. Fortitude: being a true and faithful account of the education of an explorer. London: M. Secker, 1916.
Open image in new window