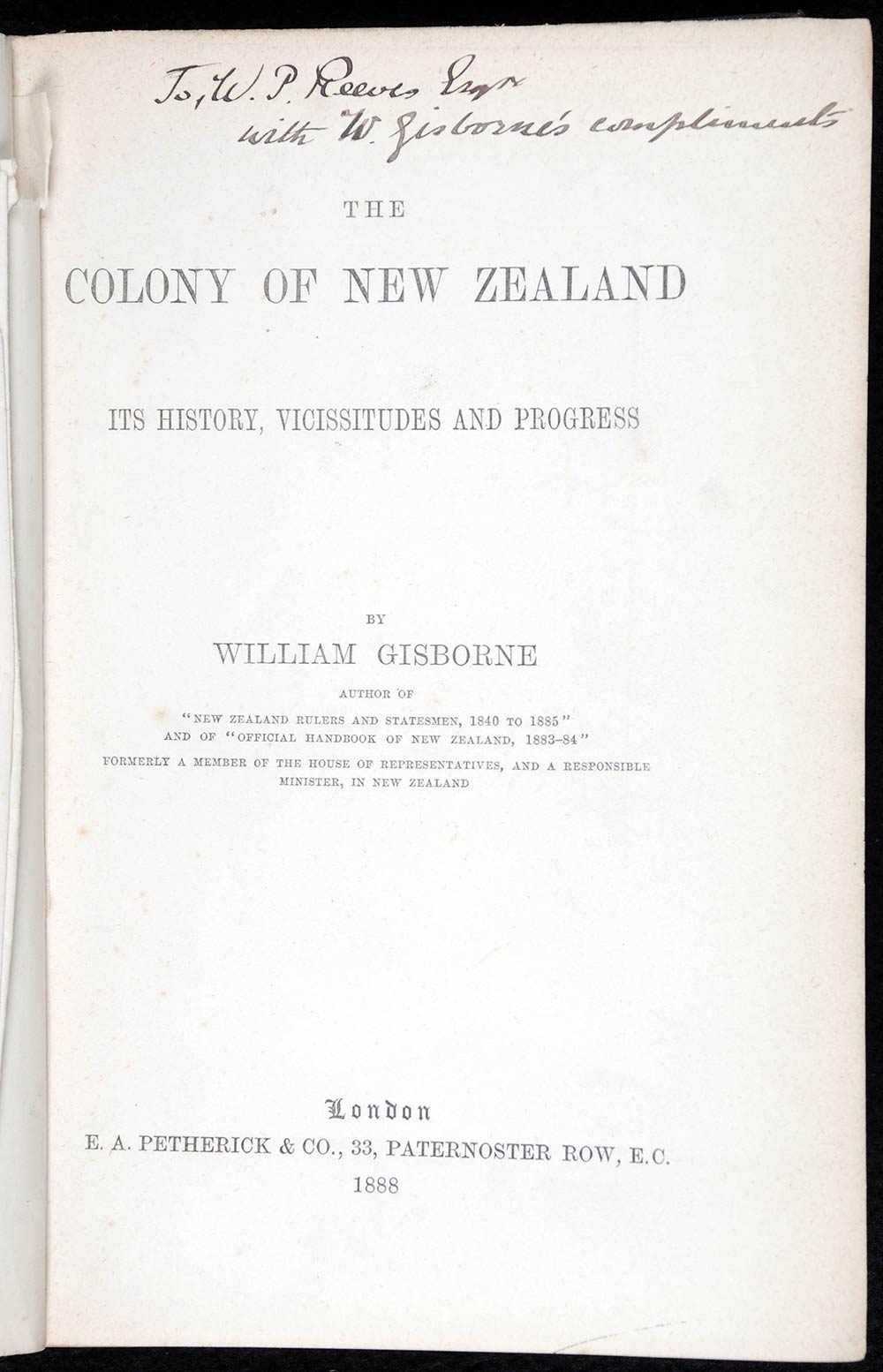 The title page of this copy of William Gisborne’s early account of New Zealand bears his presentation inscription to William Pember Reeves.

Gisborne (1825-1898), civil servant, politician and writer, was the author of two important books on the colonial era: New Zealand rulers and statesmen (1886) and The colony of New Zealand (1888). He is remembered by having had the city of Gisborne named after him.

Reeves wrote of Gibson: “In the House of Representatives he was the mildest of men, yet as a writer of political articles he had a trenchant style with quite unsuspected powers of banter and sarcasm.”

When he acquired the book in 1929, A.H. Reed, with characteristic courtesy, wrote a letter to Reeves offering to return it to him. Reeves responded with gratitude that the copy would be best served in the Dunedin Library, noting that “Gisborne’s autograph will always give it a certain value and interest.” 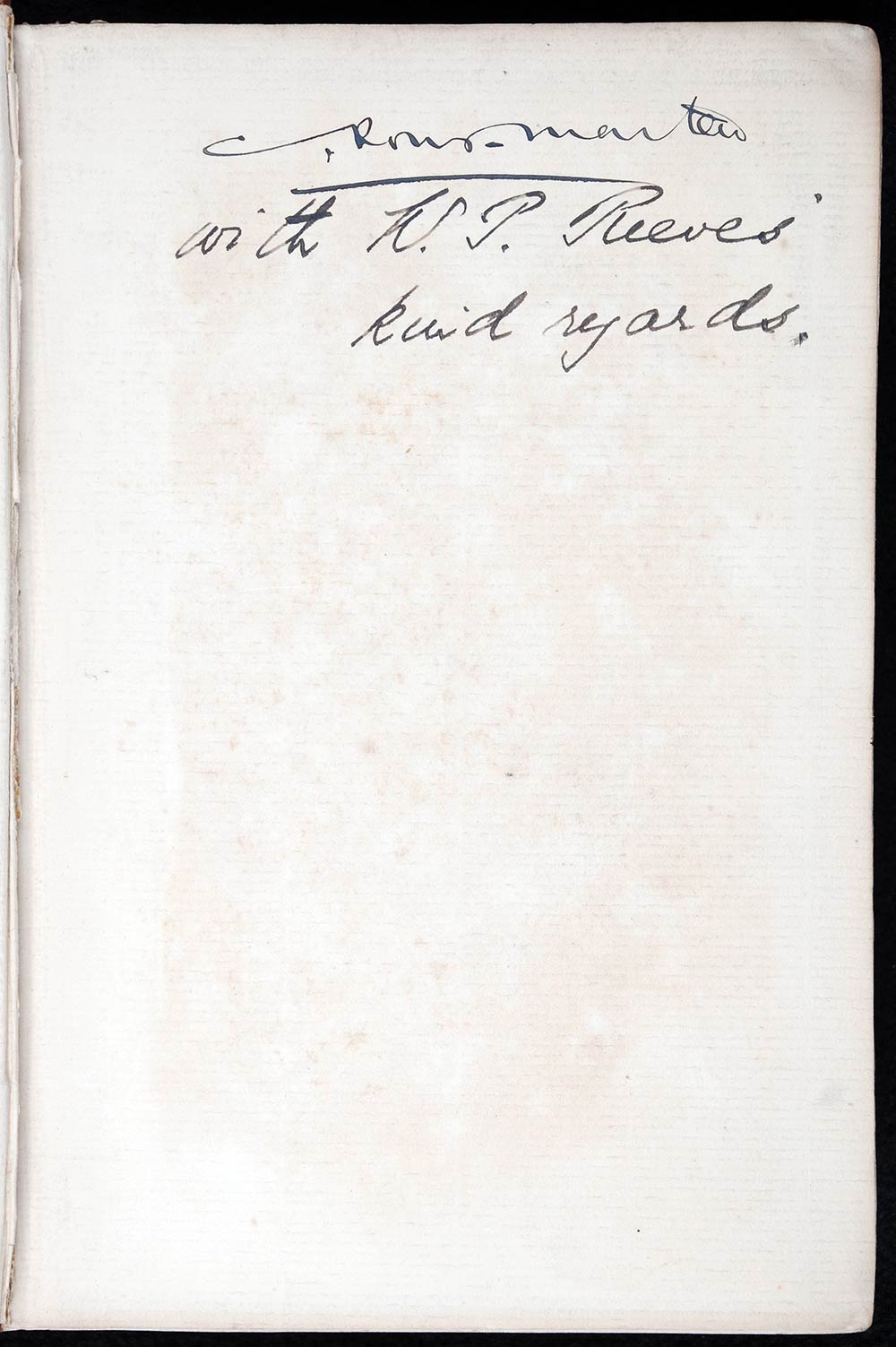 This first edition of William Pember Reeves’ The long white cloud contains his signed presentation inscription to Charles Rous-Marten (1842-1908). Both men were in England at the time of publication and both were trained journalists.

Reeves (1857-1932) appears to have used this copy in preparation for a second edition. Corrections are noted in the margins, and notes, seemingly additions to the text, are inserted. Curiously however, these corrections were never used in subsequent editions. The reason for this remains a mystery, as does the reason for his gift of this particular copy to Rous-Marten.

The long white cloud became the standard interpretation of New Zealand history until the 1950s. 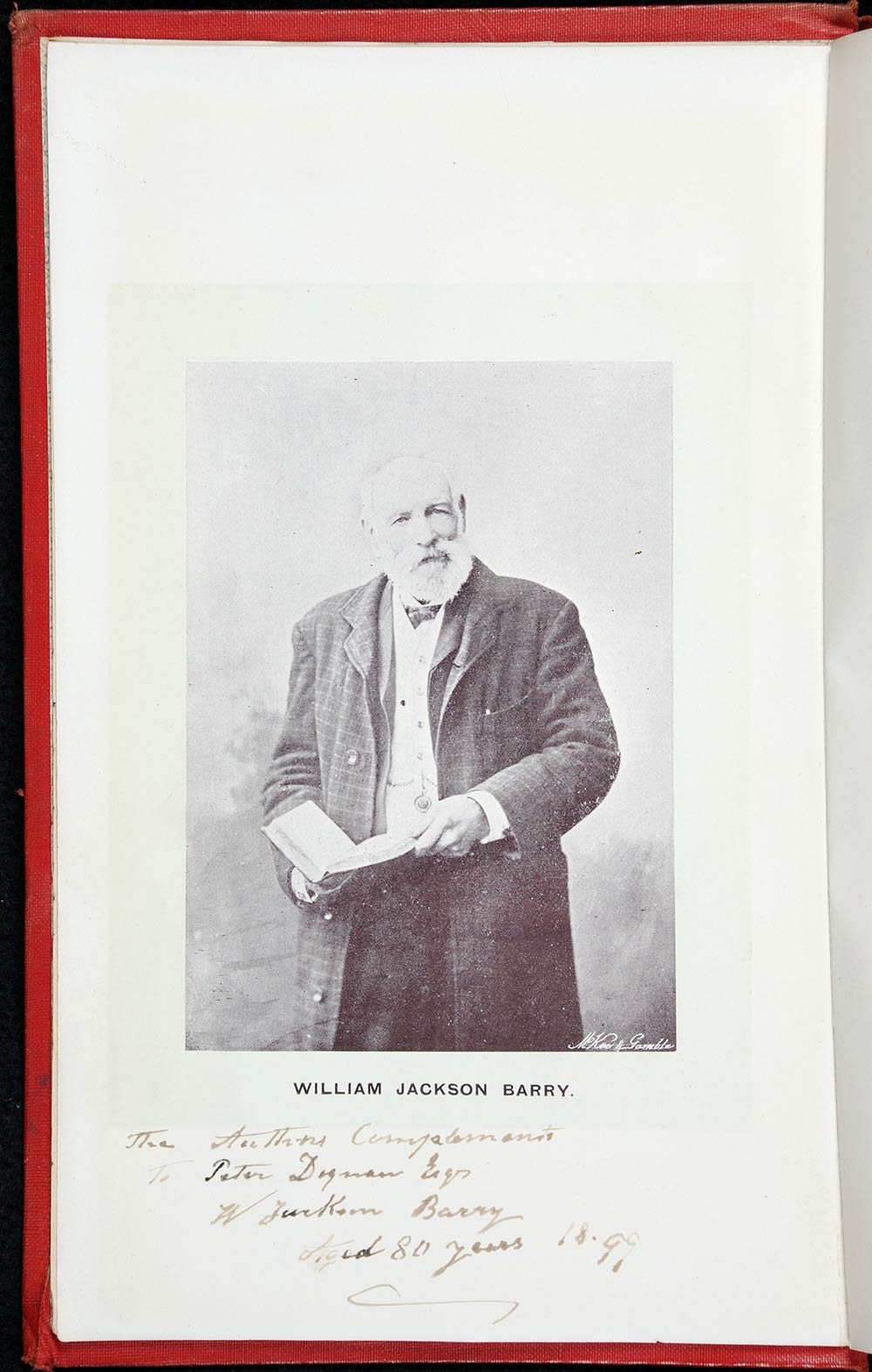 William Jackson Barry. Past & present, and men of the times. Wellington: McKee & Gamble, 1897.

‘Captain’ William Jackson Barry (1819-1907) was a notorious English-born adventurer and writer, who travelled widely before his peregrinations finally took him to Otago in 1862. As described by Ronda Cooper in the Dictionary of New Zealand Biography: “Turning with enthusiasm to any likely enterprise, he moved constantly from place to place, following opportunity, making and losing several large fortunes.”

One notable exploit was his acquisition of a fin whale skeleton at Nelson in 1882 which he subsequently towed south by cart, displaying it for a fee at various towns, before finally reaching Dunedin, where it still resides in Otago Museum’s Maritime Hall.