The comprehensive Bible: containing the Old and New Testaments according to the Authorized Version. London: Samuel Bagster and Sons, [1849?]

This copy of Bagster’s Comprehensive Bible was presented by Edward Pote Williams to Donald McNaughton Stuart on the occasion of his marriage to Jessie Robertson in England on 3 July 1850 – nine years prior to the Stuarts’ departure for New Zealand. The front free endpapers contain in Stuart’s handwriting extensive genealogical notes about his family.

Dr D.M. Stuart (1819?-1894) was a Scottish-born educationalist and the first Presbyterian minister of Knox Church, Dunedin, inducted on 16 May 1860. A genial and tolerant figure, Stuart’s public life was a marked success, but his personal life was less fortunate: Jessie Stuart died in childbirth in 1862, and Stuart was predeceased by two of his sons.

Williams was the father of the Reverend E.P. Williams (1838-1922), first minister of St Barnabas Church, Beckenham.

The comprehensive Bible: containing the Old and New Testaments according to the Authorized Version. London: Samuel Bagster and Sons, [1849?]
Open image in new window 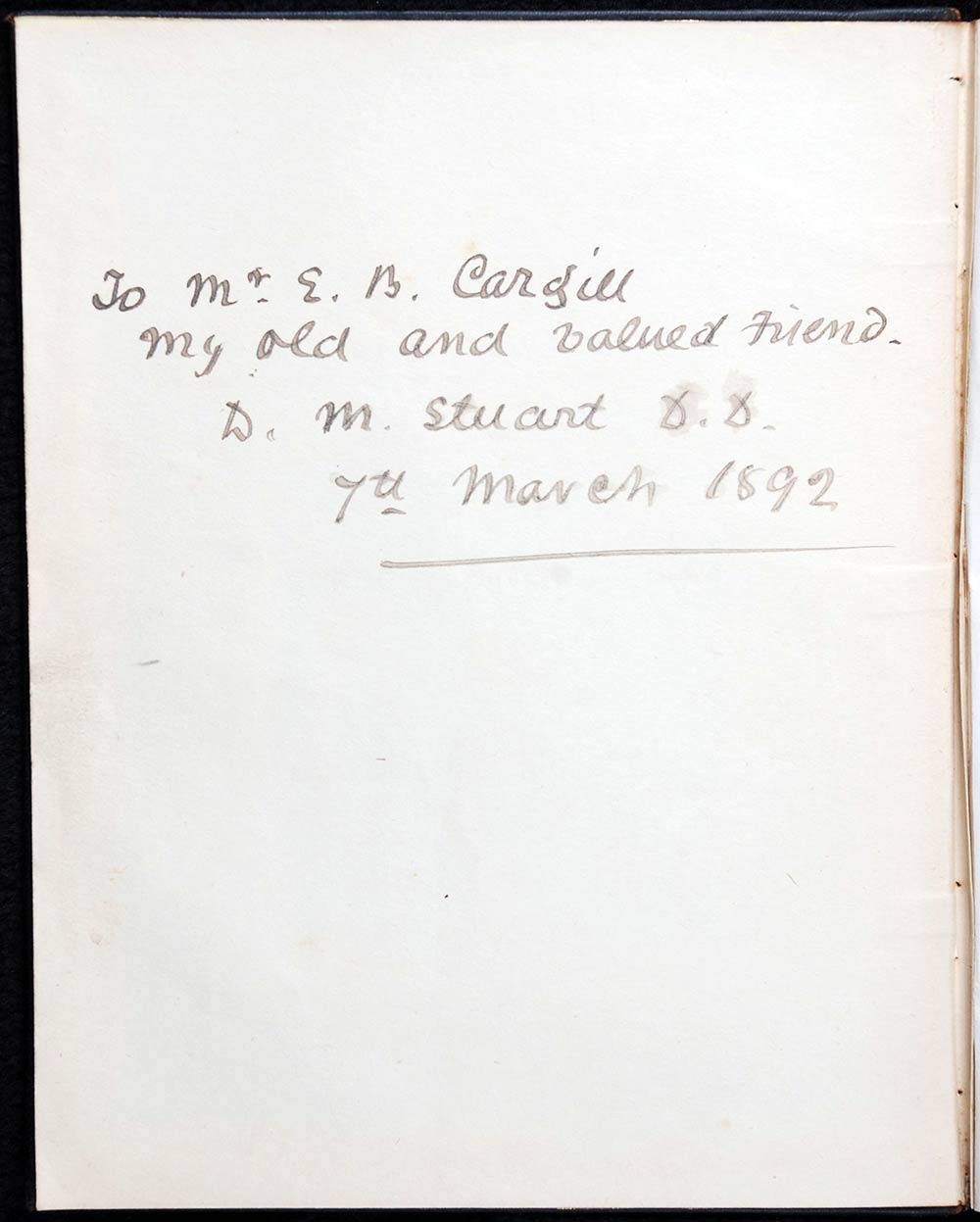 The Holy Bible containing the Old and New Testaments. Oxford: Printed at the University Press for the British and Foreign Bible Society, 1891. Four volumes; Vol. 1 displayed.

The first volume of four of this 1891 Bible includes a presentation inscription written in late life by D.M. Stuart to E.B. Cargill, dated 1892.

Edward Bowes Cargill (1823-1903) was a prominent Dunedin businessman and political leader. He was Mayor of Dunedin from 1897 to 1898, when the 50th anniversary of the founding of the province of Otago was celebrated. Born in Edinburgh, he was the seventh son of William Cargill, one of Otago’s most prominent settlers. Edward’s home was the distinctive Cargill’s Castle on the St Clair cliff tops, formerly known as The Cliffs.

Fellow Presbyterians Stuart and Cargill were good friends, and when Stuart died on Saturday 12 May 1894, it was Cargill who, on the following day, addressed the congregation at Knox Church on the subject of their bereavement. 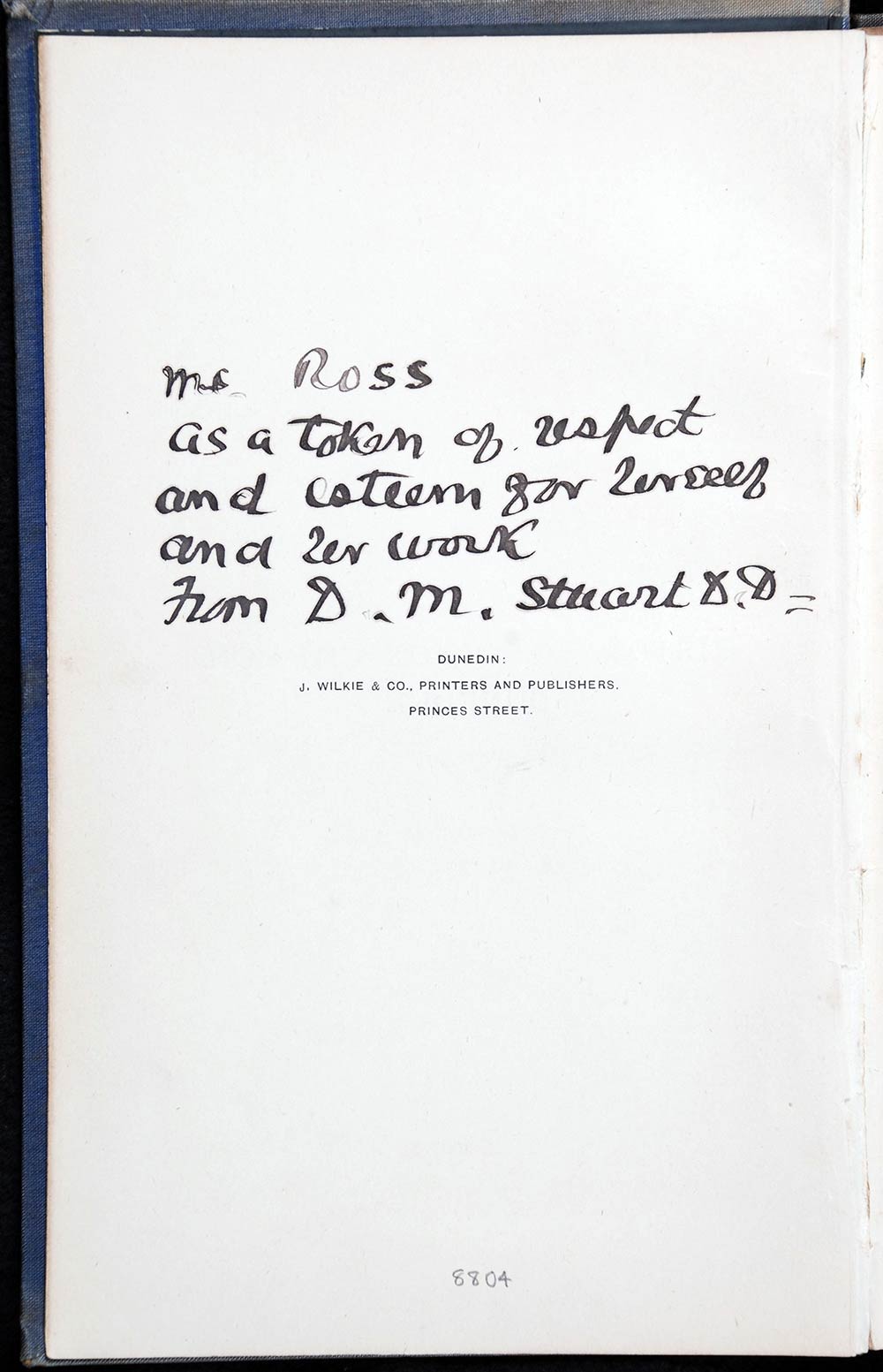 A copy of John Hislop’s History of Knox Church, Dunedin contains a presentation inscription by Dr D.M. Stuart (who wrote the introduction) to “Mr Ross as a token of respect and esteem.”

The “Mr Ross” who was the recipient of Dr Stuart’s gift is likely to be Charles Stuart Ross (1840-1927), author of The story of the Otago Church and settlement (1887) and, later, Life and times of D.M. Stuart, D.D.: a unique colonial pastorate (1894). It was around the time of this gift inscription that Ross informed Stuart of his wish to compose a biography of the Reverend Doctor, which Stuart endorsed, with the provision that “I must disappear from this scene before a work such as you propose can be launched.”