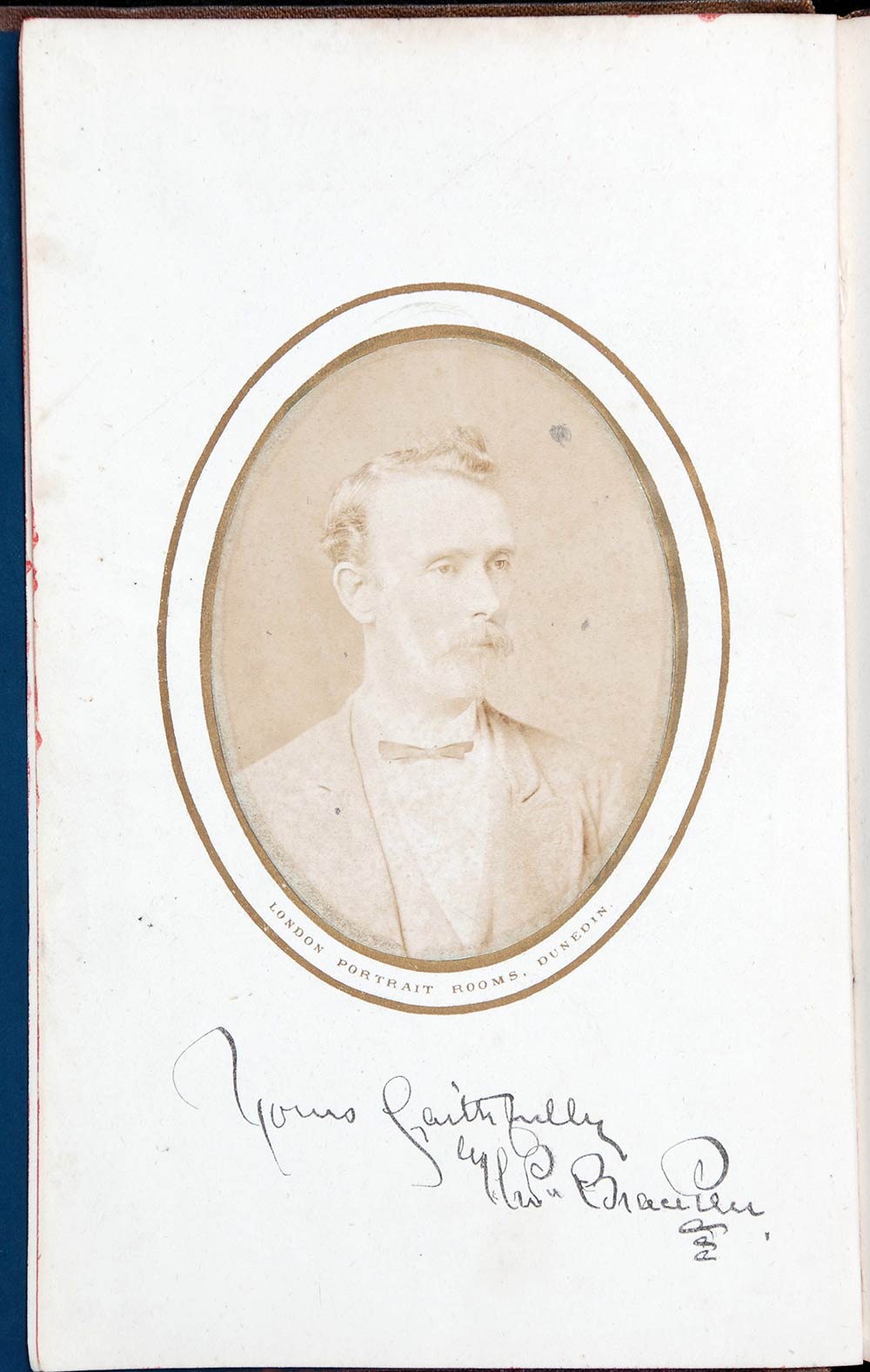 Bracken presented this copy a mere six months after Vogel, his popularity in the Colony having waned, resigned the Premiership (in September 1876) to become Agent General in London.

Bracken, six years junior to Vogel, was at this stage yet to embark upon his political career. In 1879, he stood unsuccessfully for Parliament for the City of Dunedin, before winning the seat for Dunedin Central in 1881.

At the time of this gift, Bracken had recently published his ‘National hymn’, later known as ‘God defend New Zealand.’ Set to music by J.J. Woods, the first public performance of the hymn had occurred on Christmas night 1876 at Dunedin’s Queen’s Theatre. 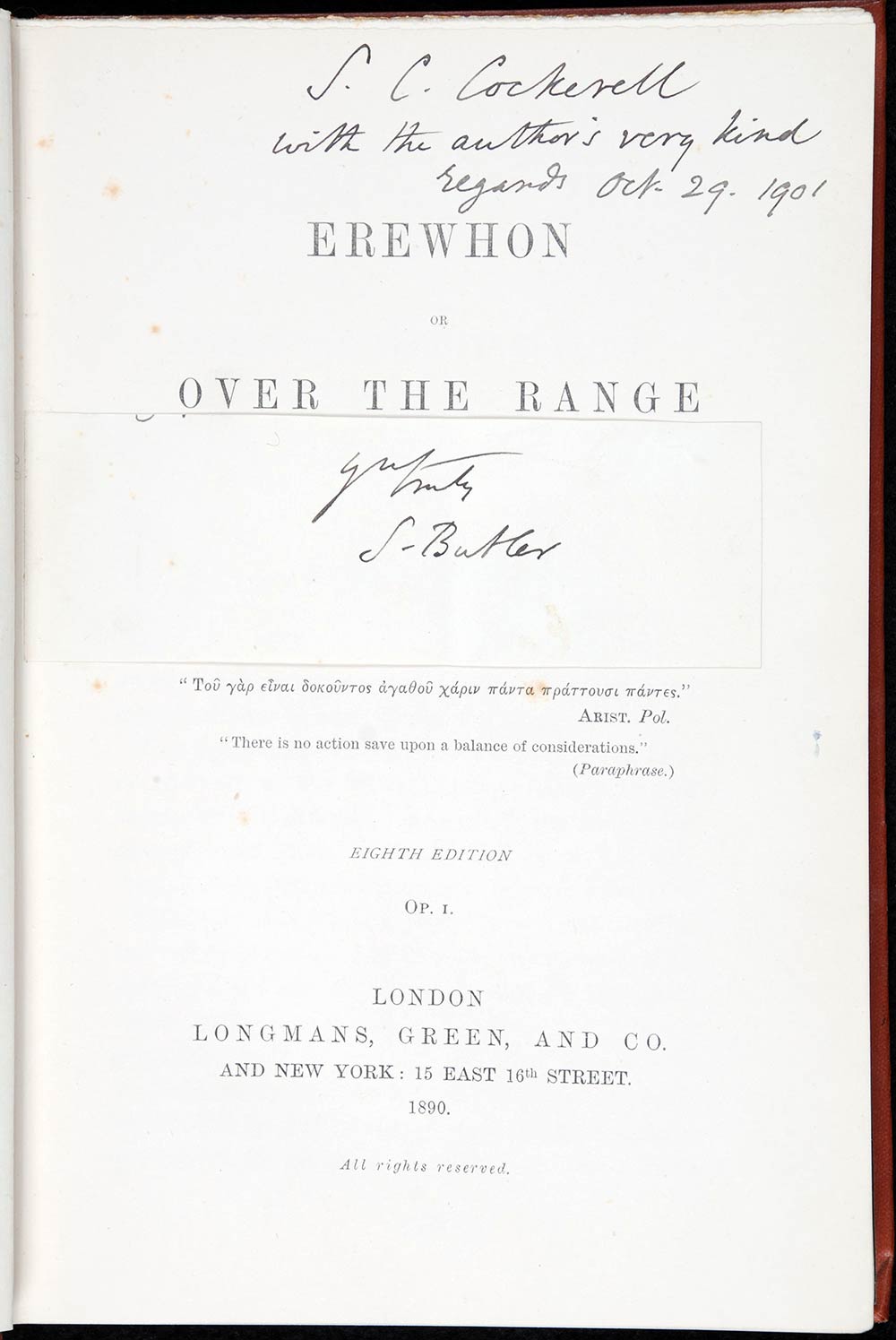 This copy of Samuel Butler’s satiric novel Erewhon contains the author’s autograph and presentation inscription to Sydney Carlyle Cockerell (1867-1962), an English museum curator and collector. The inscription was written in 1901, less than a year before Butler’s death.

Butler (1835-1902) was born in England but lived from 1859 to 1864 in Canterbury, New Zealand, where he worked as a sheep farmer. Erewhon, published in 1872, derived its setting and much of its intellectual content from the period he had spent in New Zealand.

In his biography of Butler, Henry Festing Jones describes how Cockerell had attempted to purchase the first issued copy of Erewhon, inscribed to a Miss Savage, at a 1914 London auction, but the copy had already sold. During three decades as Director of the Fitzwilliam Museum, Cambridge, Cockerell built up the collections of rare books and manuscripts, including its rich holdings of works by William Blake. 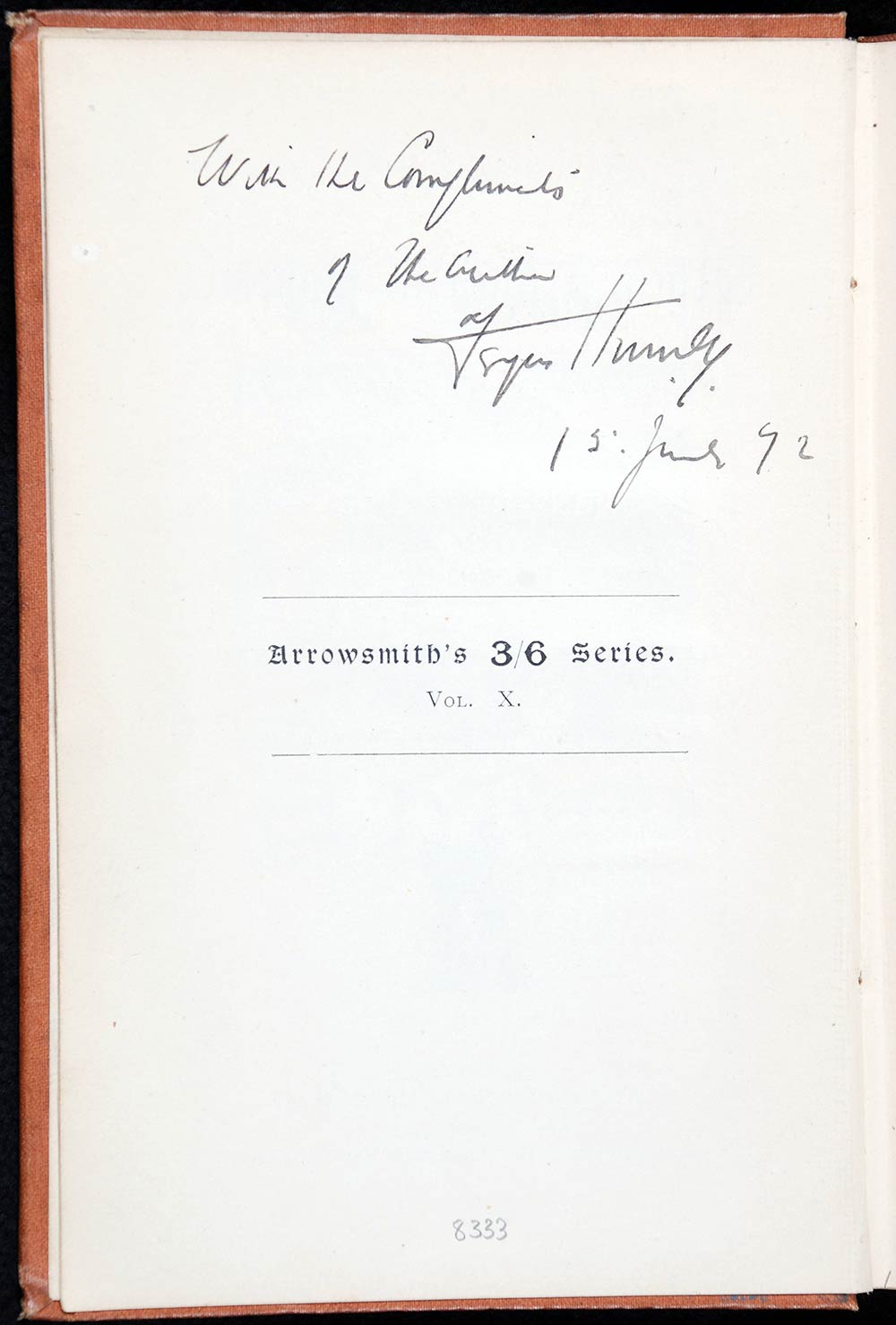 Fergus Hume. When I lived in Bohemia: papers selected from the portfolio of Peter --, Esq. Bristol: J.W. Arrowsmith, 1892.

The novelist Fergus Hume (1859-1932) was born in England but educated in Dunedin, where he attended Otago Boys’ High School and the University of Otago. Shortly after leaving Dunedin, he published The mystery of a Hansom cab, sometimes described as the first mystery novel in English and anticipating Conan Doyle by one year.

A Reed Collections copy of Hume’s early novel When I lived in Bohemia bears his autographed inscription, dated 1892. Hume would have been thirty-three years of age and living in London at the time. He subsequently moved to the Essex countryside and lived for thirty years in Thundersley, where he is buried.

Fergus Hume. When I lived in Bohemia: papers selected from the portfolio of Peter --, Esq. Bristol: J.W. Arrowsmith, 1892.
Open image in new window