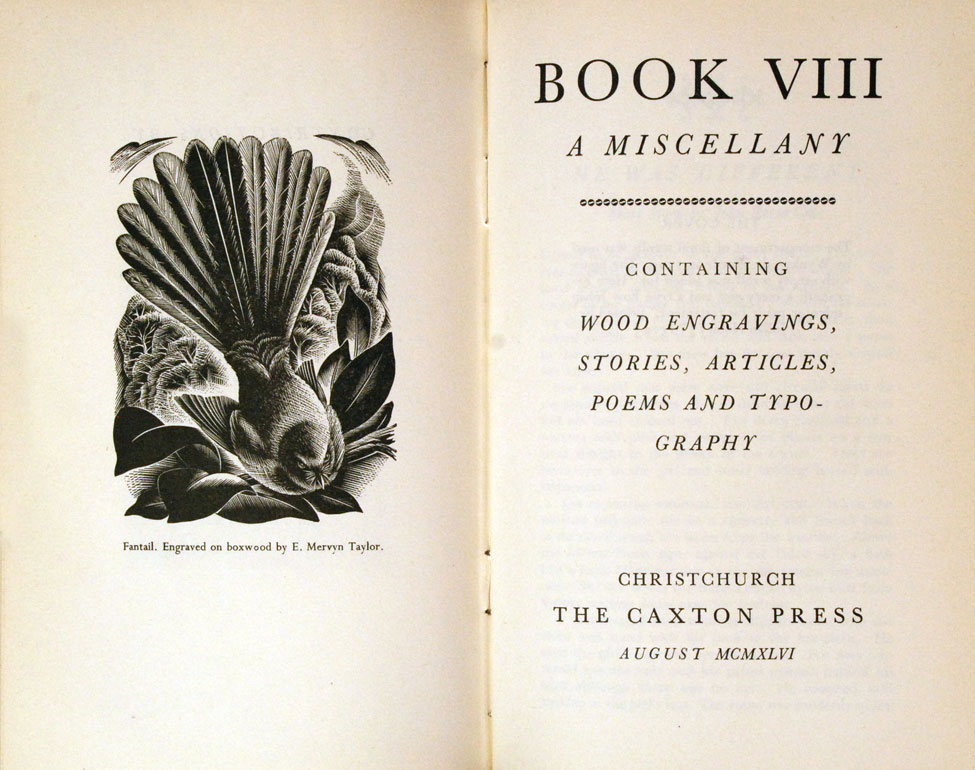 Glover’s first attempt at producing a literary journal since Oriflamme and Sirocco was Book. The periodical miscellany is best described by Noel Waite, who wrote: ‘[Book] characterises the straightforward exuberance with which The Caxton Press approached the various complexities that make up a book ... Articles [including negative reviews of Caxton publications] arguing for closer attention to critical writing were carried through into practice ...

This willingness to accept criticism reflect a genuine desire not merely to maintain, but to improve standards at the press. Book also ... displays a refreshing willingness to mock its own pretensions. In the third issue, an inscription that prefaces ‘Ode to the Caxton Press’ hints at the contribution of literary endeavours to the general operation of the press: ‘The poet Horace being in hospital and unable to pay his account to the patrician printing house of the Caxtons sends this ode’ (9).

Book was published with some irregularity until 1947, when it was succeeded by the more serious-minded Landfall. 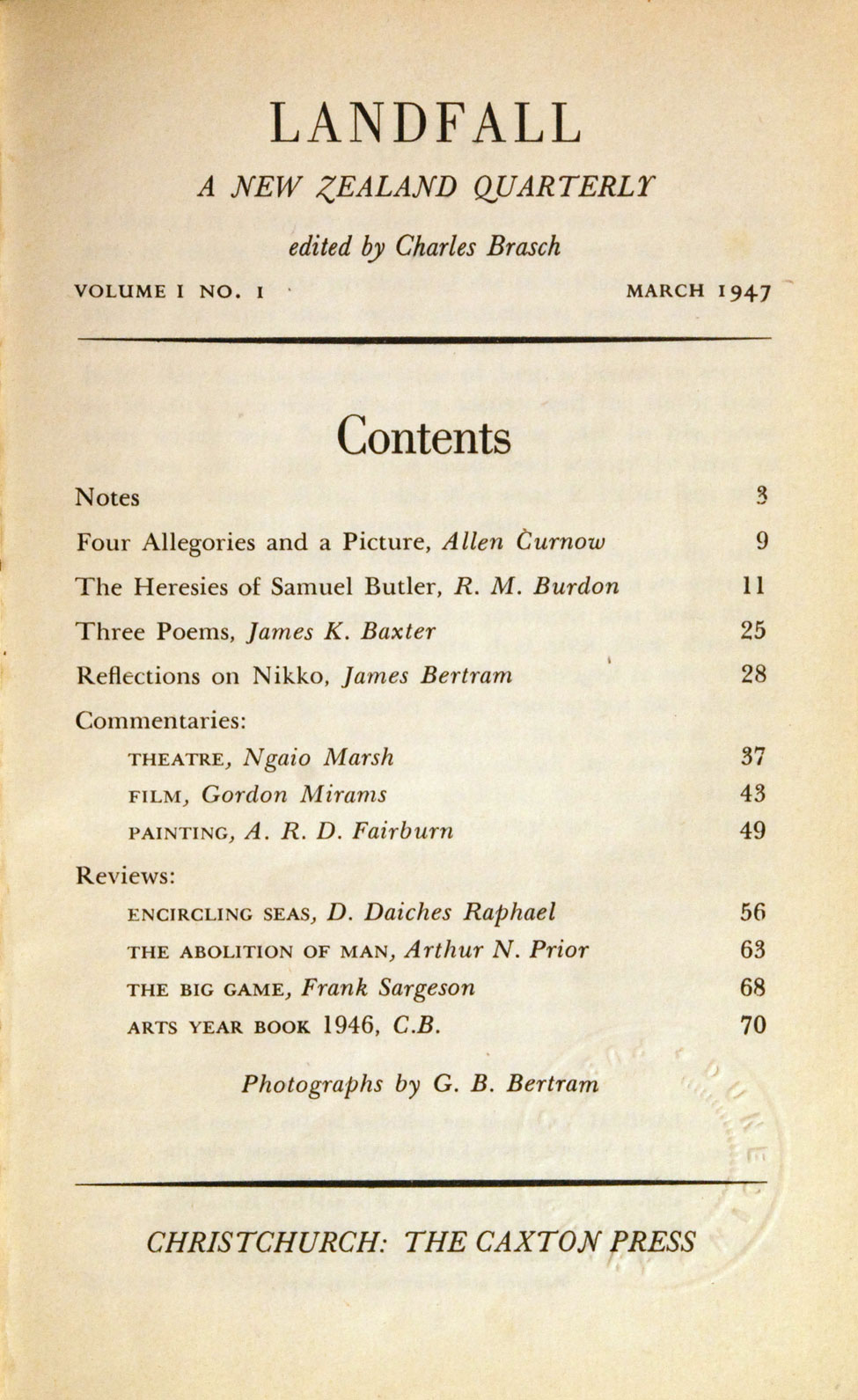 While on leave in London during the Second World War, Denis Glover visited and stayed with Charles Brasch. It was during this visit that the two men discussed the idea for a new, professionally produced literary journal in New Zealand. The result of this discussion was Landfall, now in its sixty-sixth year and New Zealand’s most important literary journal. Its content features new fiction and poetry, biographical and critical essays, cultural commentary, and reviews.

First published in 1947, Landfall was edited for twenty years by Charles Brasch, who returned to New Zealand after the war. Under his direction, the journal enjoyed a period of almost unchallenged pre-eminence in literary and artistic life (OCNZL 293). 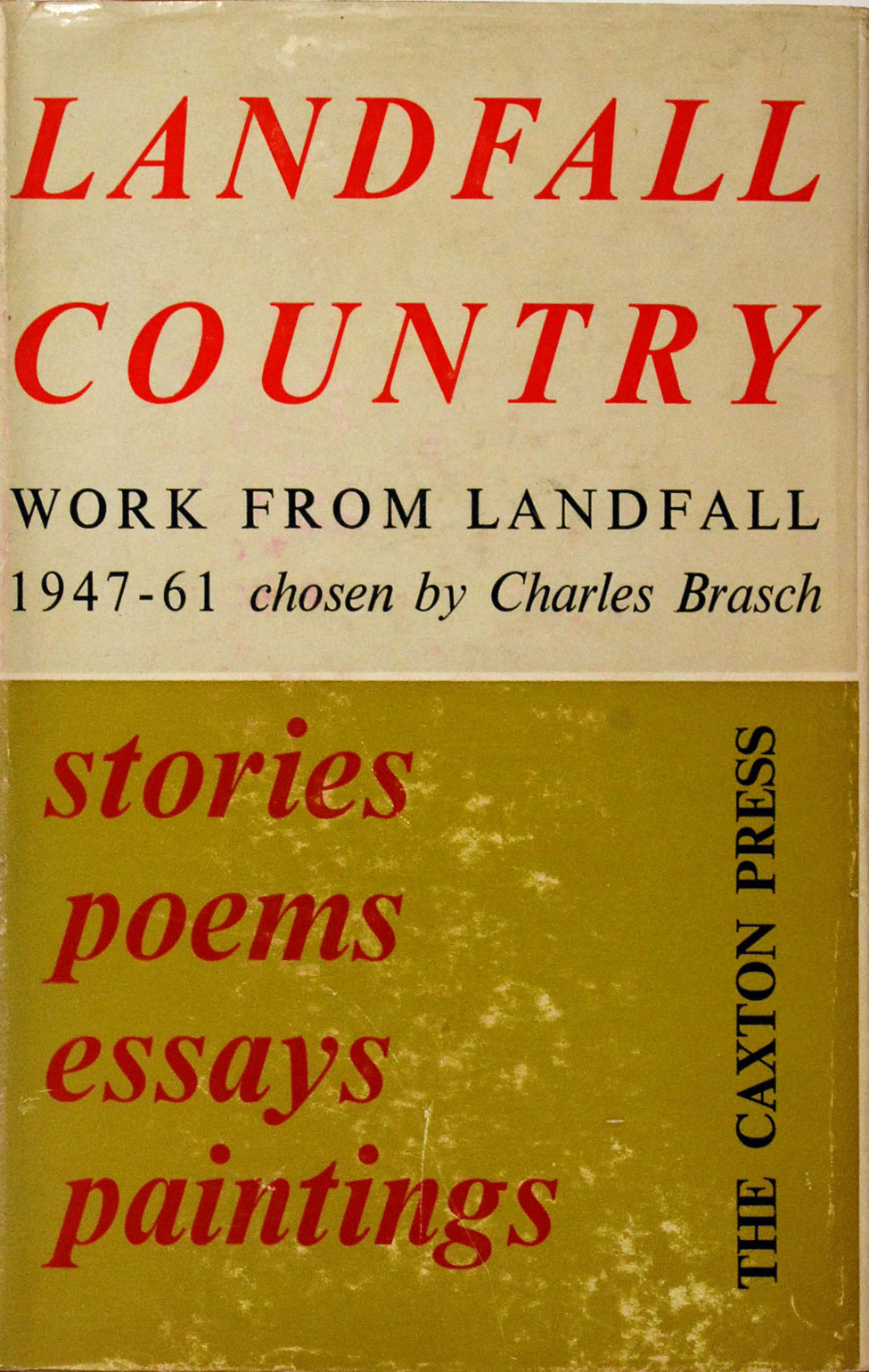 ‘The most important collection of New Zealand’s writing ever published. From the first fifteen years of Landfall Charles Brasch has selected stories, poems and essays totalling 460pp. as well as 32 plates’.
Book List (1964)

Landfall Country was the largest book ever produced by The Caxton Press, and represents the peak of the journal’s early literary achievements. It also provided an indicator to what Brasch appreciated in a story or poem, and a summary of his social and political views at that time: education, the 1951 waterside dispute, the conservation of natural resources, and artistic freedom. Molly Macalister's 'Standing figure' stands opposite Fleur Adcock's 'Prince to Kitchenmaid' (Kerr, 2003).