Case 6 - The Trinity, The Dove & The Man of Sorrows 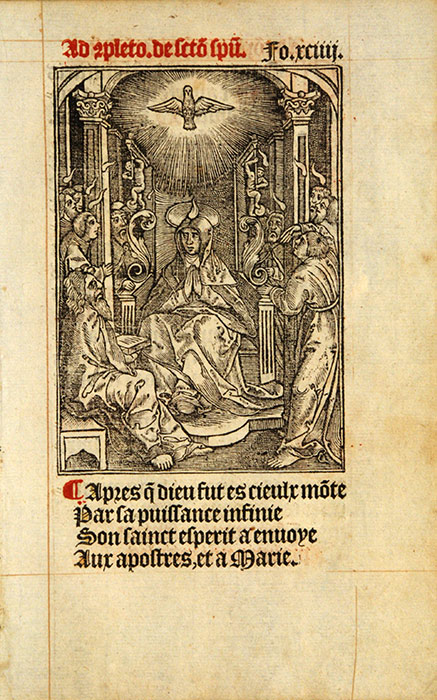 This striking image of a three-faced Jesus reflects him as the embodiment of the Holy Trinity: the Father, Son and Holy Spirit. His hands rest on the Shield of the Trinity or Scutum Fidei (‘Shield of the Faith’), which expresses aspects of the Trinity and symbolises part of the Athanasian Creed.

The four nodes are interconnected by six links. The three outer nodes are labelled with the names of the figures of the Trinity, with Deus (‘God’) as the central node. The outer links are labelled non est (‘is not’) while the central links are labelled est (‘is’). The design, approximately 800 years old, summarises a complex theological issue in the form of a compact diagram. In essence, each figure is not each other but all are God, and God is all three.

The emblems of the Evangelists, the eagle, winged man or angel, ox and lion, are found in each corner of the central panel. 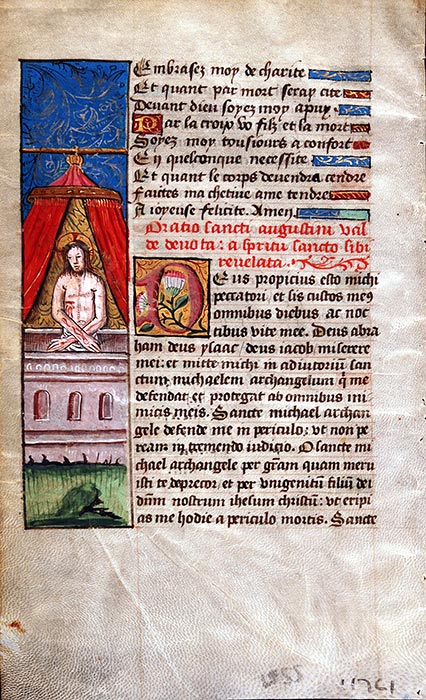 Single leaf from a Book of Hours, in Latin and French. Northern France, late-fifteenth or sixteenth century. Reed MSF60

This image portrays the Christian feast of Pentecost (Whit Sunday), the commemoration of the descent of the Holy Spirit upon the disciples of Jesus after his Resurrection. The dove, pictured here amidst rays of light, is the symbol of the Holy Spirit and of the soul. Reference is found in Acts 2:2: ‘and suddenly there came a sound from Heaven, as of a mighty wind coming, and it filled the whole house where they were sitting'. The Latin Spiritus as in Spiritus Sanctus (‘Holy Spirit’) means ‘breath’, ‘wind’ and ‘soul’, signifying ‘the power and movement of animate nature’ (Child and Colles 112). A soaring dove, long a sign of peace and purity, with its wings outstretched, is a very fitting symbol.

At centre is the Virgin Mary surrounded by the twelve apostles; the wisps of flame symbolic of their capacity to speak all languages as noted in Acts 2:3–2:4: ‘And there appeared to them parted tongues, as it were of fires, and it sat upon every one of them. And they were all filled with the Holy Ghost, and they began to speak with diverse tongues, according as the Holy Ghost gave them to speak’. 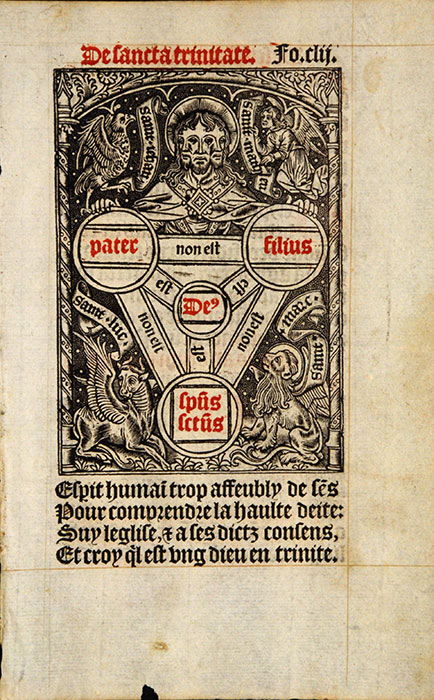 This devotional image of Jesus Christ bearing the wounds of his Passion is known as the ‘Man of Sorrows’, derived from the Suffering Servant in Isaiah 53:3–5:

(3) He is despised and rejected of men, a Man of sorrows, and acquainted with grief. And we hid as it were our faces from Him; He was despised, and we esteemed Him not. (4) Surely He hath borne our griefs and carried our sorrows; yet we did esteem Him stricken, smitten of God, and afflicted. (5) But He was wounded for our transgressions; He was bruised for our iniquities. The chastisement of our peace was upon Him, and with His stripes we are healed.

The thistles, which appear in the decorated ‘D’ of Deus, are not only a symbol of the Passion but are also representative of sin and sorrow.