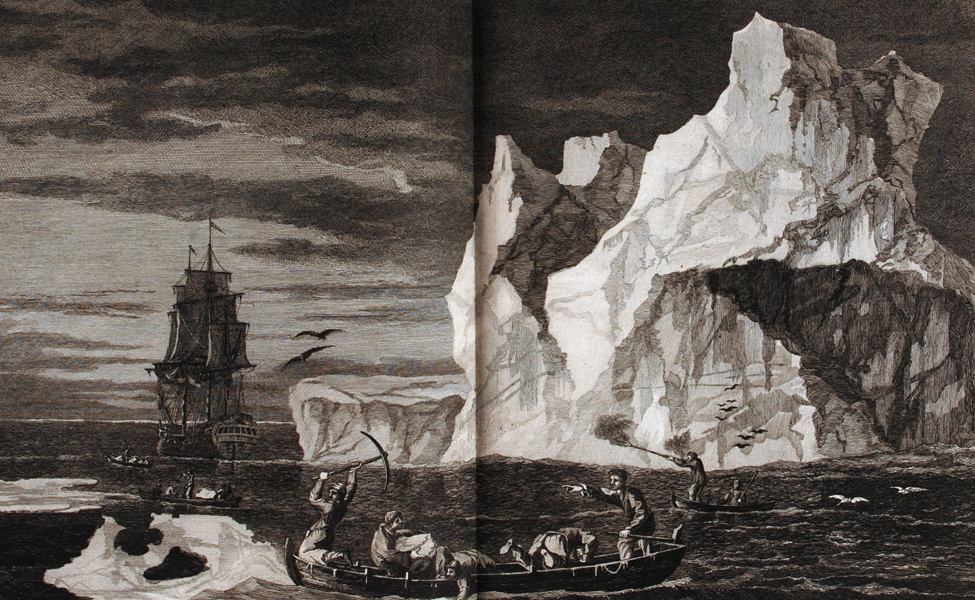 James Cook. A Voyage Towards the South Pole, and Round the World…. London: Printed for W. Strahan; and T. Cadell in the Strand. MDCCLXXVII [1777]. Two volumes, volume one displayed.

The mythology surrounding a vast, cold continent in the far south that ‘balanced’ the northern lands of Europe, Africa and Asia had existed in western culture since Antiquity. Polynesian culture has its own legends about the cold southern lands. The Māori legend of Ui-te-Rangiora, for example, tells the tale of the seventh-century navigator encountering ‘a place of bitter cold where rock-like structures rose from a solid sea’. It was, however, not until the fifteenth and sixteenth centuries when European explorers making their way around the southern tips of South America and Africa confirmed the presence of icy lands further south, though this would turn out to be far from the massive Terra Australis envisaged by Aristotle and others.

While previous explorers had journeyed to some of the lower latitudes, the first to cross the Antarctic Circle was James Cook (1728–1779), who recorded the event in his journal on 18 January 1773:

‘AT ABOUT 14 past 11 o’clock we crossed the Antarctic Circle for at noon we were, by observation, four miles and a half south of it and are undoubtedly the first and only ship that ever crossed the line’.

Cook’s ships the Resolution and Adventure were prevented from venturing further south due to the massive ice wall in their path. In January 1774, the ships managed to reach 71° 10’ S, approximately 120km from the Antarctic mainland, and the furthest south anyone had been up to that point in time.

James Cook. A Voyage Towards the South Pole, and Round the World…. London: Printed for W. Strahan; and T. Cadell in the Strand. MDCCLXXVII [1777]. Two volumes, volume one displayed.
Open image in new window