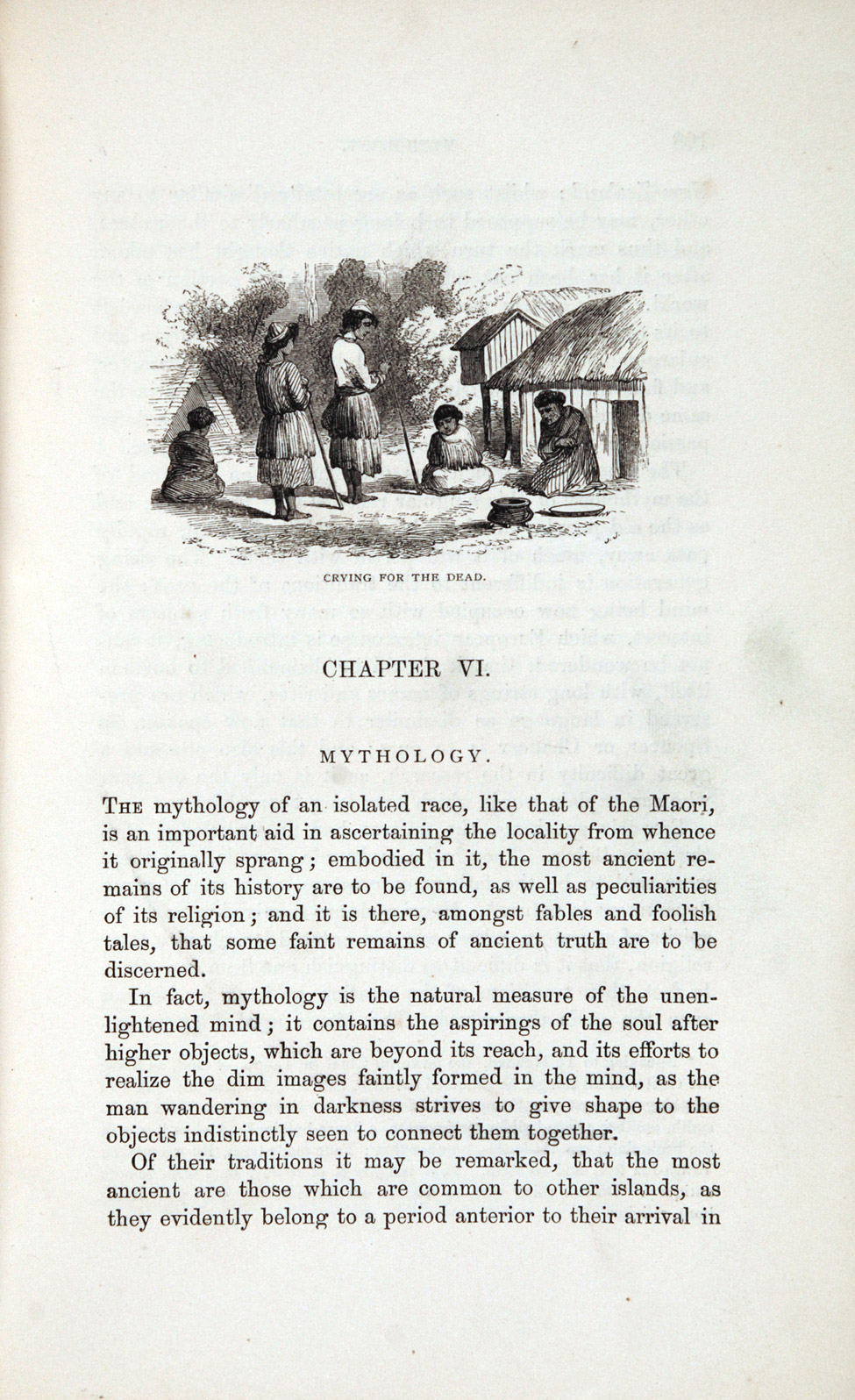 Church missionaries were best positioned to record the myths and legends of the Māori people during New Zealand’s early colonial period. Missionaries, however, generally failed to collect such information due to either insufficient knowledge of the Māori language or an unsympathetic view of Māori beliefs.

One exception was the Reverend Richard Taylor (1805–1873). His Te Ika a Maui, first published in 1855 and covering a variety of subjects, shows a level of interest in Māori mythology rare among his fellow missionaries. T. M. Hocken noted that ‘the traditions and myths, previously almost lost, are very full, and many appear for the first time’, but found some of the information untrustworthy (Hocken 182). Taylor’s theories were indeed of his time. According to Jane McRae, Taylor’s ‘suggestion … that the culture and beliefs of the New Zealanders indicated they were akin to and very likely descended from the “long lost tribes of Israel” is an example of how in print the New Zealanders could be subjected to all sorts of theoretical fancies’ (McRae 42). 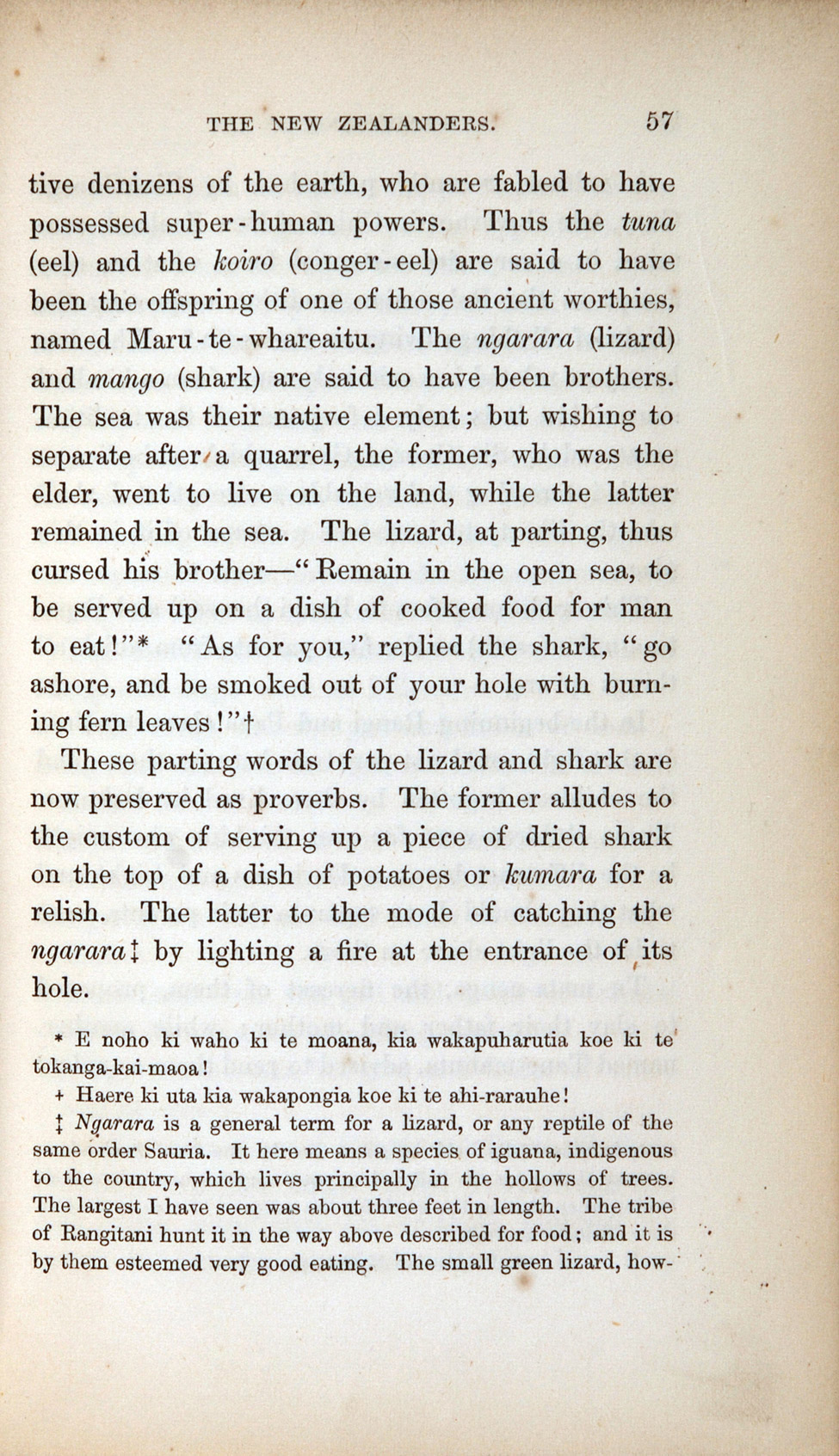 Like Sir George Grey, Edward Shortland (ca. 1812–1893) was a non-missionary collector of Māori myths and traditions. Shortland, a scholarly administrator and interpreter, was charged by the government with gathering information on the Māori of both islands. He travelled extensively and made detailed notes on Māori history and genealogy, information gained through direct conversation with chiefs and elders of various iwi and hapū.

These experiences lead Shortland to publish. In 1854 he produced Traditions and Superstitions of the New Zealanders, a book that summarised some major waka chronicles, cosmological ideas and formative traditions. Some of his work drew from Grey's Polynesian Mythology and Te Ika a Maui by the Reverend Richard Taylor. Unlike them, however, Shortland took care to maintain the separation of tribal beliefs and stressed the complexity of local culture (McRae 42).

The text on the left shows part of the origin myth from Moeraki (on the east coast of the South Island). The legend at right is that of the lizard and shark who were said to be siblings. 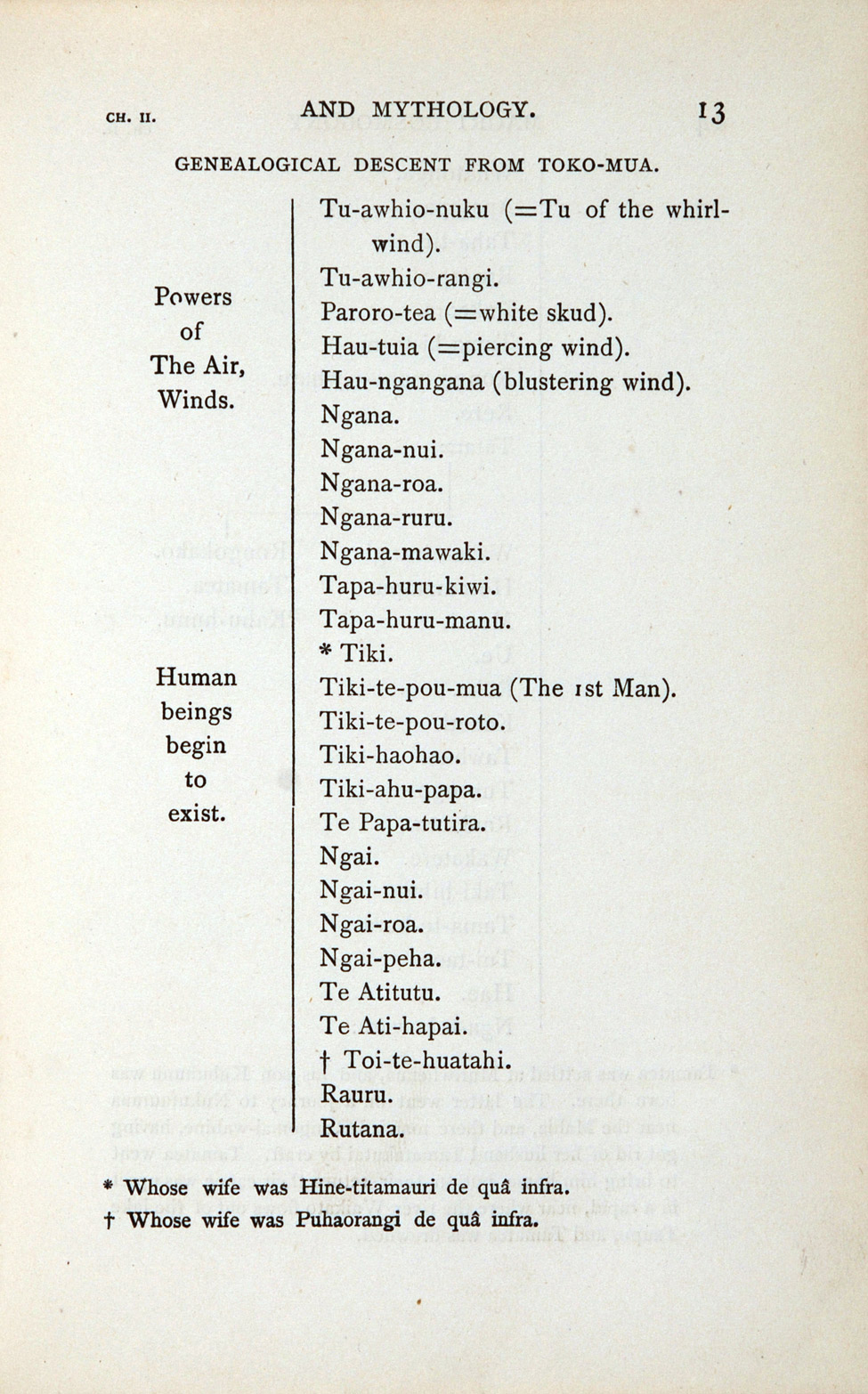 In 1882 Shortland published Maori Religion and Mythology, which included an extensive survey of Te Arawa traditions, and a version of Matiaha Tiramōrehu's South Island Māori cosmogony.