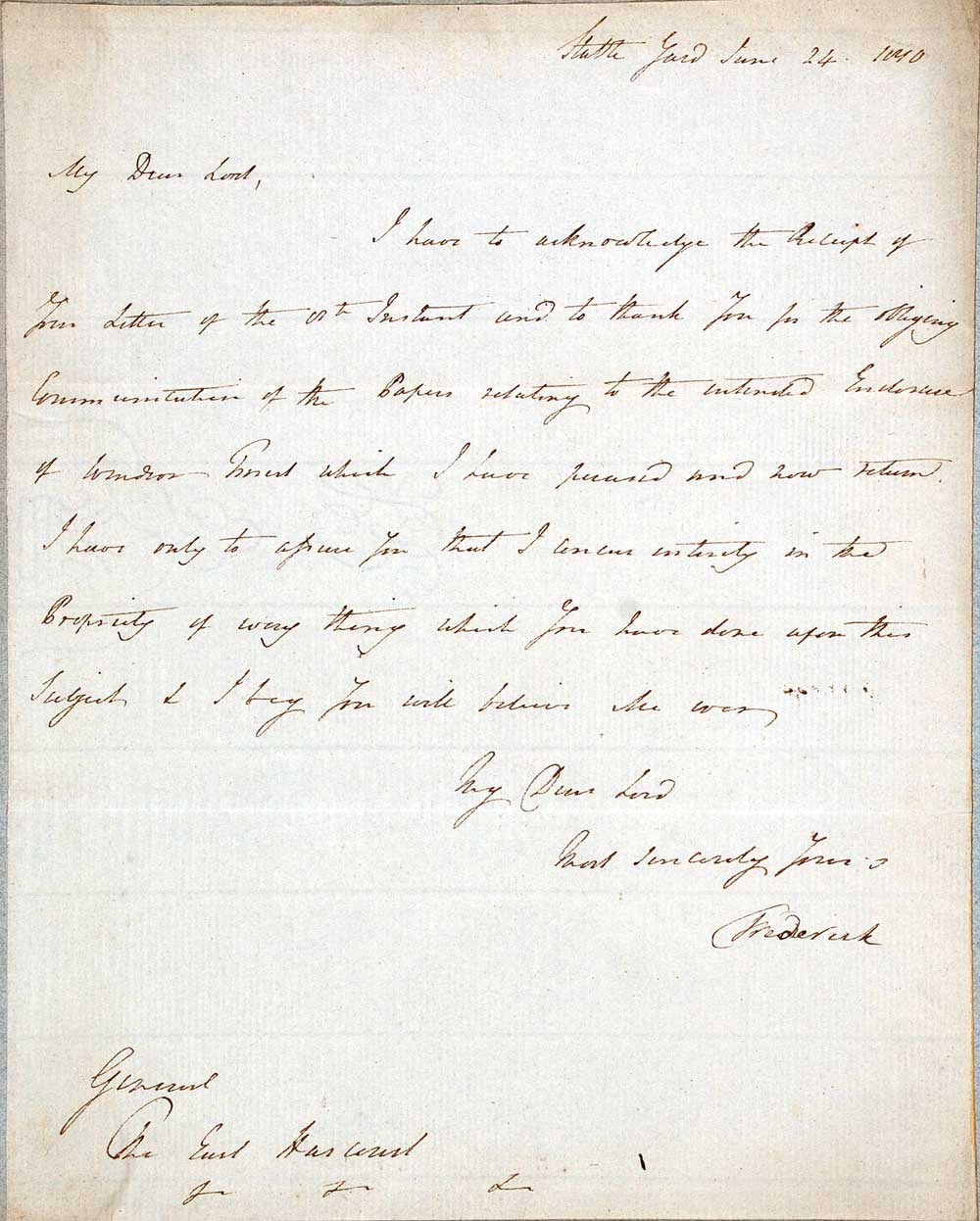 Prince Frederick was the second eldest child, and second son, of King George III. From the death of his father in 1820 until his own death in 1827, he was the heir presumptive to his elder brother, King George IV. As an inexperienced young military officer, he presided over the unsuccessful campaign against the forces of France in the Low Countries, during the war which followed the French Revolution. Later, as commander-in-chief of the British army, he reorganised the army's forces, putting in place administrative reforms.

Frederick’s letter of 24 June 1810 is an acknowledgement to an earlier letter by the Earl of Harcourt concerning the ‘Papers relating to the intended Enclosure of Windsor Forest’. The Prince, who ‘perused’ the papers, assured Harcourt that he was in agreement with ‘every thing which You have done upon the Subject’. Three years later, Parliament passed the Act for the Enclosure of Windsor Forest, which vested ‘in his Majesty [George III] certain Parts of Windsor Forest, in the county of Berks’, and effectively placed what was once common land in the forest under royal domain.

Elizabeth was the third daughter and seventh child of George III and Queen Charlotte. In 1808, the as yet unmarried Elizabeth founded a society at Windsor to provide marriage portions for poor virtuous girls. Two years later, when her father lapsed into dementia for the final time, Elizabeth became a close companion to her mother and acted as her secretary. In 1818 at the age of forty-eight, she married Prince Friedrich Joseph Ludwig Karl August of Hesse-Homburg who succeeded his father as Landgrave of Hesse-Homburg in 1820. Afterwards Elizabeth’s brothers and sisters referred to her affectionately as ‘Betty Humbug’.

This letter is catalogued according to the note on the recto, though it is suspected to be written to one of the daughters of Wiliam Hay, 17th Earl of Erroll, rather than his third wife, Harriet Hay (nèe Somerville), whom he did not marry until October 1816. In her letter, Elizabeth bids farewell to the recipient who was departing for a voyage overseas: ‘You must have a few lines from me … before You quit our dear Old England’. The recipient must have been close to the Princess, who wrote: ‘I enclose the earrings, which I hope You will like as I invented them for You knowing Your partiality for hearts. I only pray that You may meet with One worthy of You, when I will promise to be foremost in presenting You with one as a pendant, that you may wear for the sake of a faithfull & sincere friendship’.

The verso of the letter mentions Julia de Montmollin (1765–1841), teacher of French and needlework to Elizabeth and her sisters.